Difference Between a Wave Cap and Durag – Quick Answer

Wave caps and durags are quite similar pieces of headdresses and may confuse many. Traditionally made for the special texture of hair that people of African-American ethnicity have, nowadays, they are both quite trendy and useful pieces of cloth.

So it is very important to learn the difference between wave durag and cap so that you can choose the best one for your particular use. Let’s dive in and learn a bit about both of these useful and fashionable headgears!

Wave caps have basically emerged as a new form of the durag in the 1990s and early 2000s. These are like skullcaps that fit tightly around the head, from below the hairline to the front of the head, covering the whole hair.

Modern wave caps are typically made of delicate materials such as nylon and polyester, whereas they have previously been made of women’s stockings.

Wave caps are currently used for four main purposes: for creating 360 degree waves in the hair (as the name suggests), for keeping hair and hairstyles in place, for fashion purposes as a headdress, and for protecting hair from direct sunlight. Rappers commonly wear wave caps as a fashion statement, and have contributed greatly in making these trendy.

Due to the structure of wave caps, they are suitable only for short hair, whether it is used for hairstyling, protection, or for fashion purposes.

Wave caps are more commonly worn amongst the youth today, and even though they are available in a variety of colors, the most common color they are worn in happens to be black.

The durag became a very useful hairstyle preserver in the 1930s during the Harlem Renaissance and Great Depression and later on, in the 1960s, evolved into a fashion statement after the Black Power Movement.

During this time, it was worn by African-American men in all wakes of life, from rappers and athletes to the common public.

Other than for fashion, the 1960s saw the use of durags to create 360 degree and 720-degree waves, braids or dreadlocks in long hair and to keep chemically processed hair and hairstyles safe during sleeping.

Even though durags were largely worn by men from the 1930s upto the 1960s, they gradually entered into the fashion realm for both genders.

Durags are typically categorized into three types according to the material they are made of:

Due to the materials they are made of, durags are quite durable. They consist of a hood-like piece in the front and two strings at the back for tying. They come in a variety of prints and colors.

How Do They Work?

Let us take a look at the ways the two products can be put on and used to make waves in detail. 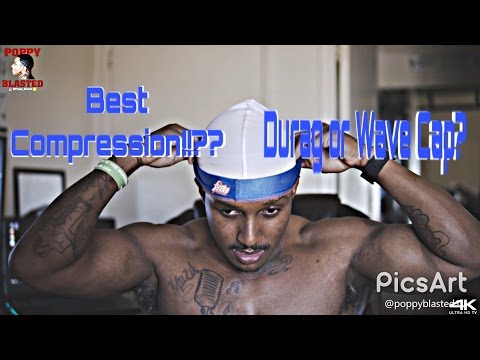 How To Put Them On?

Here’s the step-by-step guide on how to put them on.

How To Create Waves?

Here’s how you can create waves.

Which One To Choose Wave cap or Durag?

Even though the terms wave cap and durag are commonly used interchangeably, it is crucial to know the difference between them to be able to choose the best one for you.

If you have short hair, then go for wave caps. If you have long hair, then opt for durags. If you want some extra tightness along with your durag, then put on a wave cap on top. As a bonus, it will act as a cool fashion statement!

Any more question on wave cap and durag? Let us know by commenting below.