It is common that people get confused with the definition of the port and starboard. These are nautical terms of orientation that depends on the structure of the vessels.

They are constructed in a symmetrical way which means they have a mirror-image in the left and right side.

A few years ago, before boats had helms, boats were controlled with a steering oar. In the beginning, they started to use these steering oars by the right side for being right-handed.

So they began to call the right side as starboard by combining two English words. Herein, the term starboard comes from the old English word “Steorbord” referring to the side the boats were steered.

As the size of vessels grew, so did the steering oar. The boats started to be moored by the opposite side where the steering oar was so much easier for porters to aboard charges and passengers.

Besides, the part of the boat that faces the port was larboard (as commonly called), but over time, it changed its name to Port. 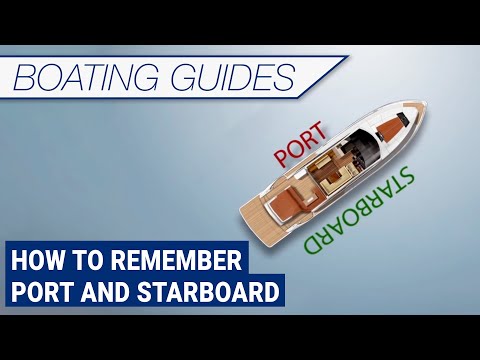 How To Remember Port And Starboard?

Below, we will learn some ways to remember some basic notions about both Port and Starboard.

Just came up with this and it really seems helpful. Each word has its direction in its fourth letter at the beginning of the word.

Location On The Boat

It does not matter the position the person has, these places never change. It’s like the cardinal directions; they do not change, no matter the direction a person is.

Another key to help you remember these definitions is to use colors. Some people have used this way because it is an easier form to know where you are placed once you are on a boat.

The port navigation is always red while the starboard is always green so that when you get into a boat just by watching these colors, you must know where you are.

For those people who are used to using a compass or for those who like the cardinal points; they can remember these definitions by knowing the west and east points.

Port and left have four letters, once you know this, then you know Starboard is right. Q1. Does everybody have to know that?

Not really, but it would be a huge advantage if you know.

Q2. Does it matter the direction a person is pointed?

Q3. Is there another way to remember it?

Another one can be: the port and left are both shorter words than right and starboard.

Q4. Any example of when to use Starboard word?

Yep, for example: “Hard to starboard!” said the Captain.

Q5. Give an example of how can I remember the port side in a fast way?

Port side is where the boat faces the port to let the passengers get into the boat.

Q6. What do port and starboard colors mean in nautical terms?

When you are on a boat; there are several probabilities that an emergency can occur, so it is important to know in a quick way what is the port and starboard side so that you can help the passengers or the commanding officer if required.

As we have said, these are navigation terms to refer to some locations inside the boat. By the time passes by, there have been many tricky games to remember them. You just have to practice every time you can so that you will not forget about it.