How Much Anchor Chain Do I Need? Get the Right Answer

There’s a question that baffles many boaters – what length of anchor chain should I use when I drop the hook? Is it something I have to get right?

Well, yeah, you have to get it right, as too much anchor rope will lead the boat to swing into other boats, while too little rope will lead it to drag.

The depth of the water is the primarily factor to consider when deciding on the length of anchor chain you’re going to use. In case you are looking to anchor the boat in tidal waters, the tidal range has to be considered as well.

This is particularly important if you’re in waters that experience big tidal ranges, like in the Bristol Channel ports.

Imagine dropping the hook in waters with a depth of 3m, then six hours later, you find your boat having almost 20m of water under it – that is what happens when the tidal range varies rapidly, and it’s the reason why accounting for the tidal range is important.

In contrast, if you’re in calmer waters, like the ones in the Caribbean, where the tidal range is normally as low as ½ meter, you could just ignore it as a factor for the anchor length to use.

You’re not intending to use a tape measure to get the distance from your boat to the seabed, are you?

To get the actual length of rope needed, you will need to add the distance to the bow roller to the figure provided by the electronic depth sounder.

What's Happens At The Anchor?

The Critical Angle Vs the Minimum Length

The critical angle is the angle at which the rise of the anchor from the seabed leads the anchor to start becoming effective, and in most cases, it is about 15° to 20°.

To avoid this angle being exceeded, it is recommended that you use anchor rope that is about 4 times the effective depth from the bow roller to the seabed. So, if the distance is 10m, the anchor chain should be at least 40m.

With such an anchor chain, gusts of the air wouldn’t be much of an issue as the catenary in the chain would absorb them, thereby eliminating the need to increase the load on the anchor.

In case another vessel is within your boat’s swing circle, after laying the correct anchor rope length, then you know you are a little too close.

However, when the winds are very strong and violent, the boat may veer off, such that there’s no more catenary left to absorb more gusts. How to avoid that situation?

Effect on the anchor

When there’s an air gust, the shock is transferred directly to the anchor, leading it to drag or break out if the shock is too much. Now that’s not a possibility you’d be comfortable with, is it? In that case, we will show you two ways of anchoring the boat, one for normal conditions and the other for maximum security.

If the conditions at sea are moderate, then follow these steps:

Deploy an anchor chain that is four times the distance from the roller to the seabed.

Attach a stretchy 10-meter snubber along the length of the anchor chain to absorb the shocks, which would otherwise be transferred to the anchor, causing it to drag. You can use a three-strand nylon rope for the snubber but an more effective option would be an 8-strand multiplait.

Be sure to use chain hooks or a rolling hitch to connect the snubber and make sure the snubber is at least 10m long.

For ultimate security, you will need to use more anchor chain. Take your boat’s length, double it, and add the figure to 4 times the distance between the roller and the seabed. That’s how long the anchor chain out to be.

With that, you can rest assured your boat is securely anchored; you could even go on a trip without anything to worry about. 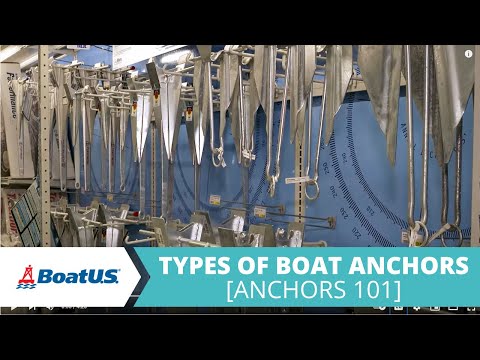 The anchor is slowly lowered over the bow to the seabed, and then the boat is slowly backed away, downwind. As soon as the hook reaches the sea floor, the engine should be put in reverse, till the hook digs in.

After that, you should back up steadily, disbursing anchor rope till you’ve attained the desired scope.

The anchor consists of a hook, a load, and an anchor chain. This anchor is lowered to the sea floor, where the hook attaches itself and secures the boat.

3. What are good anchor ropes made of?

Nylon. This is a great choice for a vast majority of anchor and docking lines. The nylon is usually in braided strands, and the advantage is that there’s easy stretch as well as resistance to abrasion. Another option was steel cable but it is riskier than Nylon rope.

By now, we like to believe you know how to calculate the amount of anchor chain need for anchoring your boat properly. As you’ve seen, the first step is to take the reading from the electronic depth sounder, then, you add the distance from the water surface to the bow roller.

Next, you multiply the figure by 4 – that’s the minimum anchor chain length required for normal conditions.

Did you find this guide helpful? Why not share it with your boating buddies?  Also, let us know if you have anymore query on this topic.