Difference Between Freshwater And Marine Water

You might be inclined to guess about the differences between freshwater and marine water is only about there is salt in one and not in the other. Although it is naturally sensible to think so, it’s not really the case.

In marine or sea water, the salinity level, or the concentration of salt is greater, but freshwater is not totally void of it.

Salt in the marine water is much more complex than our table salt. The water is formed of diverse elements, and when those particles are broken down, they turn into electrically loaded ions.

These elements are greater electricity conductors. So electricity passes through this water more efficiently and quickly than it could in freshwater.

A freshwater ecosystem consists of streams, wetlands, ponds, lakes, and rivers. These are composed of generally animals and plants that are unable to thrive in highly saline water.

Thus in freshwater, they can easily survive. Some of these sources are more diverse than others, as some might be isolated from other water sources.

Marine ecosystems are more diverse than freshwater ones. They include salt marshes, wetlands, estuaries, mangroves, and give accommodation to various different kinds of animals and water plants.

But they are much more sensitive. And mass human pollution is causing more damage day by day in the marine life.

Marine water can actually be deadly if you drink it. Being wrecked in the sea will bring a very high risk of getting dehydrated because drinking the salt takes more liquid from the cells to balance out saline level. This high water reduction in cells can be fatal. Thus leading to death.

An object has less buoyancy in freshwater than it has in marine water. The buoyancy is set by two types of pressures:

These two forces work in conflict with each other. As a result of these forces, the thing will either sink, float or stay suspended down the water.

If you try to swim in any freshwater lake, you’ll realize that it takes much more hard work to stay on the water’s surface than it would in the sea instead. In fact, the Salinity of the Dead Sea is so high that it’s hard to walk past the hip water level because of the high buoyancy.

Moreover, the environmental differences are fascinating. Amphibians, Fish, and plants of one type usually cannot survive in another type of water. Because natural development requires them to stay in their preferred salinity level.

If you take a freshwater fish and put him in a marine tank, you can say you're killing him! He won’t be able to persist.

But some species of fishes can live in both saltwater and freshwater. They're called ‘euryhaline’ and are usually found in habitats where the salinity is changed regularly, for example; in tide pools and estuaries.

The Green Crab or some alligator gars species can thrive in both the marine and freshwater. 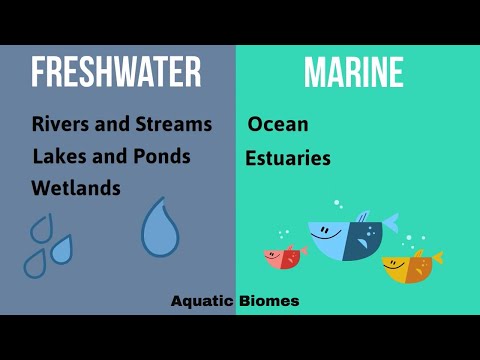 In Short Freshwater vs Marine Water:

So, that’s all I have got for now. If you want to go more thorough on a specific realm, let me know in the comment section below. Cheers!